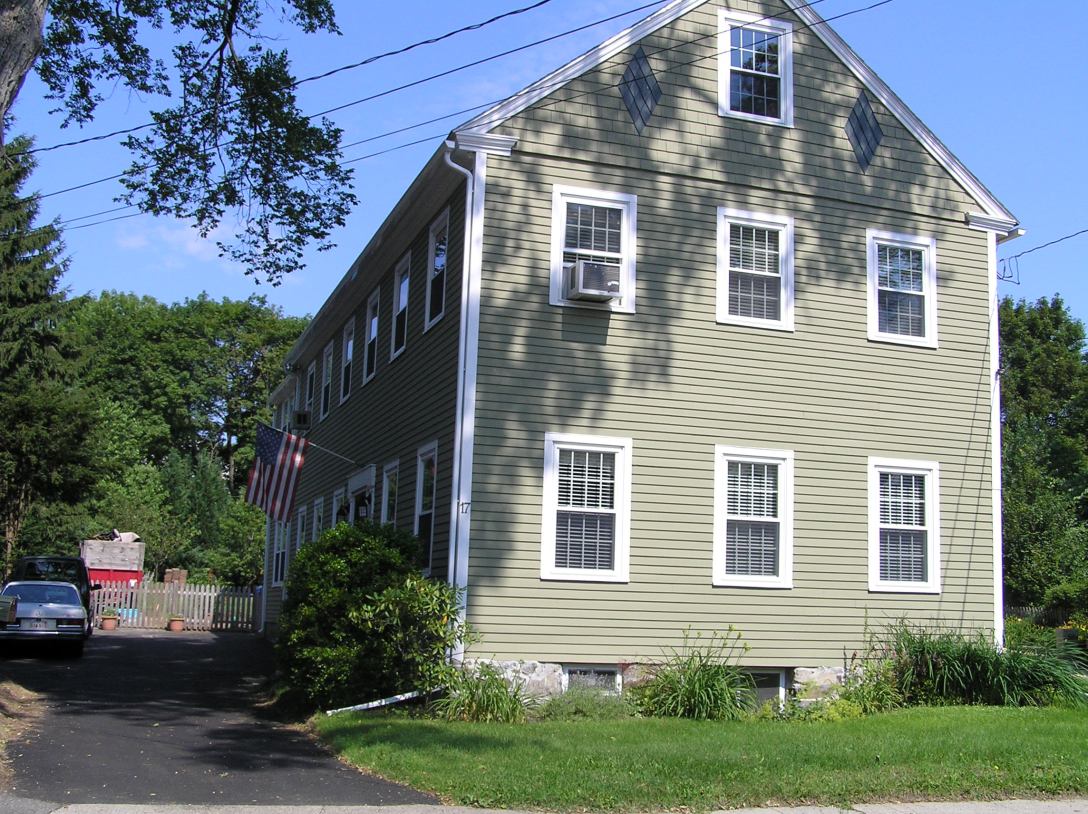 The house at 17 County Street was originally built as a mill near the EBSCO dam in 1843. The building has two historic names, Hoyt’s Veneer Mill, and Perkins & Daniels Stocking Factory. Joseph Felt wrote, “The old saw mill fell into ruin, but a new building for veneer sawing was built by Mr. Benjamin C. Hoyt, about 1843. This was removed by Mr. James M. Wellington about the year 1859, to its present location on County Street.

Thomas Franklin Waters confirms and adds more in Ipswich in the Massachusetts Bay Colony: “Benjamin E. Hoyt had a mill for sawing veneers on the east end of the dam (the EBSCO dam) which was afterward removed by James Wellington to a location on County Street and was used for many years as a shoe factory by Wellington and Daniels in the upper story, and by Wellington for a dwelling house.”

The Agawam Manual and Directory tells us that Farley & Daniels succeeded Perkins & Daniels in 1884. This photo shows workers at their store which was located on Market Street. The tall older man in the front row is Richard Daniels.

George Gilmore was a carpenter and contractor in Ipswich, and there was none better. Many of the houses on Brownville Avenue, and even Brown’s Mill, were built by this man. The house which he lived at 17 County Street was moved from around the footbridge on South Main Street to its present location. It had been a shoe shop and George Gilmore made it over into a home.

It was on a Friday, June 28 of 1906 that Mr. Gilmore had just arrived home for the weekend from a job at Lake Sunapee, N.H. He was constructing a camp up there for Dr. Keyes, a town dentist. It was about five o’clock in the afternoon when the fire alarm began to sound. George Gilmore was a call fireman on the old horse-drawn ladder truck behind the old Ipswich Town Hall. He threw down his hammer and saw on the piazza and headed for the Town Hall. When he arrived, the horses had been hitched to the ladder truck and all was ready to go.

Mr. Gilmore jumped on the side of the truck and off they went down Elm Street towards Market Square. The iron rim of one of the wheels had just been repaired a week before. The trolley car tracks ran along South Main Street, and when they were passing the Savings Bank (where Skillman Services is now), the wheel got caught in the tracks. Part of the iron rim came off and struck Mr. Gilmore and left a terrible wound on his face. It completely tore his moustache and upper lip off, which was found at the scene later.

As there was no hospital here, he was carried home unconscious, and three hours later, he died. He left a widow and four children. For two years, Mr. George Schofield fought at the town meeting for a pension for his widow. He was finally successful, and she was granted $300 a year for life. Her pension was never increased, and when she died in 1954 she was still receiving $300 per year. The fire, as it turned out, was across from the present fire station, and was put out with a bucket of water. Firemen and fire engines racing to answer an alarm is dangerous business. Someone could get killed, as did Mr. Gilmore.