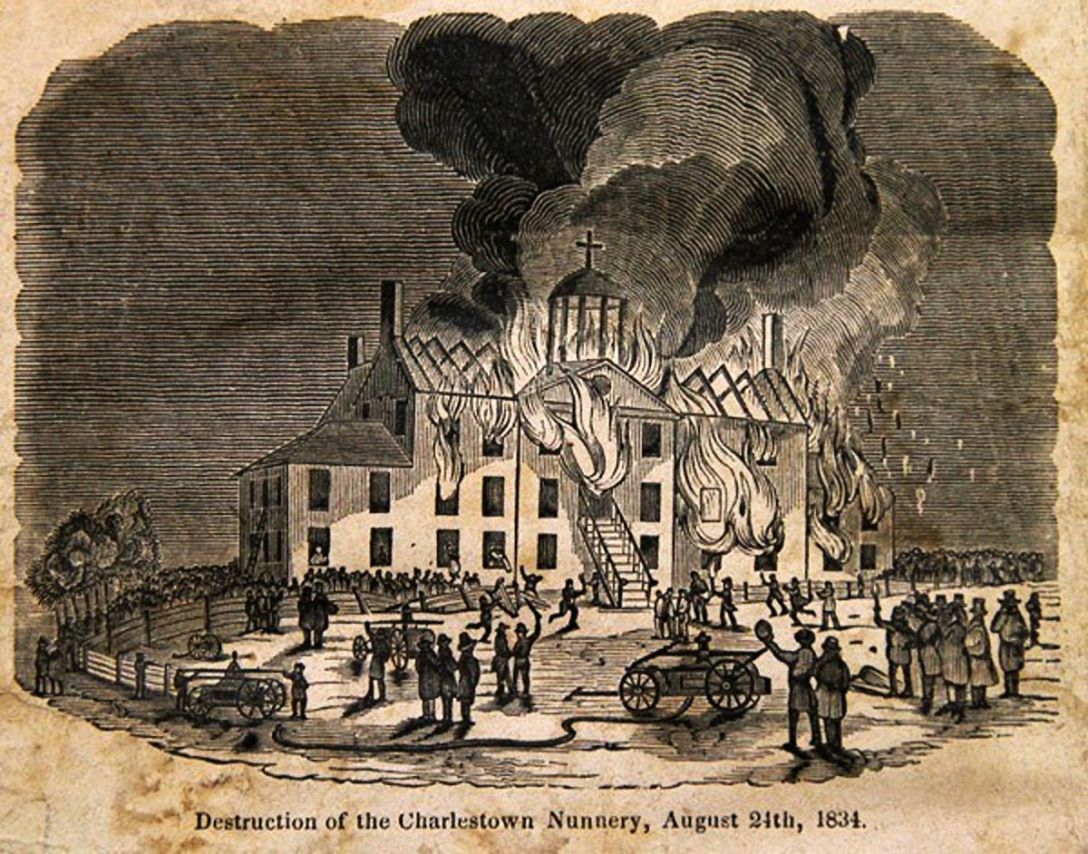 Featured image: Woodcut image of the 1834 burning of the Ursuline Convent in Charlestown, Massachusetts. Catholics and fair minded Bostonians were dismayed by the tragedy.

This week marks the 183th anniversary of the burning and ransacking of the Ursuline Convent in Charlestown, Massachusetts on August 11, 1834. The outrage would smolder in the memories of the Boston Irish for generations.

The Hub in the 1830s was economically depressed. The rising tide of immigration was considered a threat to native prosperity. The shrewd Yankee trader eyed the unkempt Irish laborer with distrust. The Celt’s allegiance to the Church of Rome was suspect. On the day before the blaze, the dynamic Calvinist preacher Lyman Beecher had delivered a caustic anti-Papist sermon in Boston. Although it was unlikely that the Charlestown rabble had attended the service, anti-Catholic sentiment was in the air.

Ironically, the majority of girls enrolled at the Ursuline Convent of Mount Benedict were upper class Protestants. Appreciating the cosmopolitan education offered by the nuns, their parents had withdrawn them from female seminaries run by the Congregationalist Church. Educated Bostonians were embracing Unitarianism. Thus, unwittingly the convent became a symbol for the conflict between liberal and fundamental Protestantism.

Many bizarre tales were circulating at the time about sisters who had escaped from the “horrors of the cloister.” Although these accounts were later proven false, they were generally believed by the working classes. On July 28, 1834, Sister Mary John had fled the Ursuline Convent in hysteria (likely caused from overwork) and sought refuge in a nearby farm house. Boston’s Bishop Fenwick, realizing the effect of such an incident on the volatile neighborhood, hastened to the scene. Shortly, the good nun regained her composure and voluntarily returned to Mount Benedict.

News of the episode electrified the community. On August 9, a deputation from the area demanded to see the sister. After speaking with her, the self-appointed investigators were convinced that she was not being held against her will. On Monday afternoon, August 11, selectmen from Charlestown, with the permission of mother superior, conducted a three hour search of the premises. Nothing suspicious was discovered.

Nevertheless, at dusk an enormous crowd began to gather around Mount Benedict. A bonfire was set nearby. The nuns and the children were terrified. The superior warned the horde to disperse. Finally, she declared “If you don’t, the Bishop has twenty thousand Irish at his command in Boston who will whip you into the sea.”

With this, some five or six hundred intruders rushed into the convent. The sisters and their charges fled to safety through the back gardens. The mob pillaged the nunnery, even desecrating the communion hosts. Attacking with a vigor with which their ancestors had executed the Boston Tea Party, they torched the structure while the local fire companies sat by and watched. It was this utter disregard by the authorities which was to rankle Catholic sensibilities for decades to come.

The respectable members of Boston society were shocked at the lawless deed on the soil of their forefathers. The act was denounced the next day by Mayor Theodore Lyman at a public meeting in Faneuil Hall. Town fathers Harrison Gray Otis and Josiah Quincy promised to rebuild the convent with private funds. Bishop Fenwick, showing dignity under stress, declined the offer maintaining that the state should make restitution. The Irish, admonished by their clergy, showed great self-control. As late as 1842, Abbot Lawrence introduced a petition for compensation which was denied.
After the tragedy, the Ursuline nuns returned to Canada. According to one account, the ruins of the convent remained in place for many years, presenting a stark contrast to the nearby Bunker Hill Monument completed in 1843. Stones from the convent structure were used to build an arch in the vestibule of the Cathedral of the Holy Cross in Boston. Yet, memories of the outrage lingered for generations among the Boston Irish.