At the foot of Hovey Street along the Ipswich River is a plaque dedicated to the memory of Daniel Hovey, placed there by his descendants. Daniel Hovey was born in 1618 in Waltham Abbey, Essex Co., England. Hovey’s home and wharf were across the river on what is now Tansey Lane. He served as a surveyor of highways in 1648 – 50, was constable in 1658, and was chosen as a selectman in 1659.

Hovey’s first wife, Abigail Andrews, was born about 1618 in Norwich, Norfolkshire, England, the daughter of Capt. Robert Andrews owner of the ”Angel Gabriel” which sank in the Great Colonial Hurricane, and his wife Elizabeth.

In 1637 the town of Ipswich granted Daniel Hovey six acres of land on Muddy creek plus a one acre house lot on the South side of the Town River. In 1639 two lots were conveyed by William Holdred to “Daniel Hovey of Ipswich, planter,” and, also, one dwelling house built on the house lot and all the fencing belonging to both lots. This was Daniel Hovey’s first known home. For many years it was the oldest house in Ipswich, eventually used as a barn until it burned in 1894. The address of the house at that location now is 52 Turkey Shore Road, built in 1895.

In June 1660, Daniel purchased 20 acres on Pye Brook in Topsfield. Hovey’s wife Abigail died in 1665. Hovey acquired the title of “Deacon” but he appeared as a defendant in Ipswich court on September 24, 1667, accused of “speaking falsely to the prejudice of General Denison” and was fined 20 shillings.

In May, 1668, Daniel Hovey and two of his sons, James and Thomas, joined a group who had departed from Ipswich to the Indian town Quaboag in western Massachusetts, which the settlers renamed Brookfield. They received lots of land laid out to the father and sons. On June 13, 1671, he conveyed to his son John, his farm in Topsfield, a piece of marshland and other property.

Daniel Hovey relocated to Hadley, where he was reimbursed 11 pounds by the Governor’s Council for contributing to the defense of the town. In 1675, he held the office of selectman for one term. His son James and remained in Brookfield, where they were among the residents massacred in the Indian attack on Brookfield at the beginning of King Philip’s War.

On September 26, 1676, Daniel Hovey was complained of for failure to pay rent to the estate of Henry Clerke of Hadley, refused to pay, but was eventually fined and forced to pay by the court. Hovey in turn filed charges against one of the executors of the estate for slandering him and his wife. The jury returned in favor of Deacon Hovey

Ssoon thereafter, Hovey returned to Ipswich with his younger son, Nathaniel. Daniel Hovey died in 1692. In his will he bequeathed his lands in Brookfield to son Joseph. His farm in Topsfield was continued by son John. His second wife Ester was given one room and all of the goods in the house, plus the cows.

The Last Days of the Daniel Hovey House

Excerpts from Ipswich in the Massachusetts Bay Colony by Thomas Franklin Waters:

The estate which God of his grace hath given me, I have disposed of as followeth:

Homes of the descendants of Daniel Hovey of Ipswich 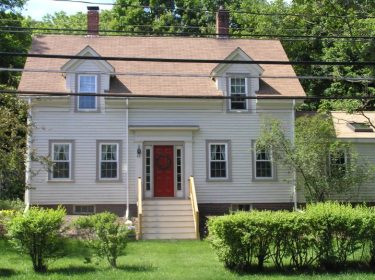 48 East St., the Tyler Caldwell house (1860) - Tyler Caldwell was "a man of thrift and industry, and amassed a comfortable property; respected in the town and well-beloved in the neighborhood where he lived."… END_OF_DOCUMENT_TOKEN_TO_BE_REPLACED

42 East Street, the Joseph Hovey house (1850) - Joseph Hovey bought a lot in 1843 from the estate of Thomas Boardman, and an adjoining lot in the rear at about the same time from J. H. Boardman. The old Boardman house was torn down about 1850, and Joseph Hovey built a house on the lot, which appears in the 1856 map.… END_OF_DOCUMENT_TOKEN_TO_BE_REPLACED

30 East Street, the Francis Jordan house - A massive 17th Century timber frame from the First Period of construction in the English colonies is fully displayed throughout this house. … END_OF_DOCUMENT_TOKEN_TO_BE_REPLACED

11 Summer Street, the Nathaniel Hovey house (1718) - Nathaniel Hovey Sr. lived only to the age of 28, about the time of the birth of his son Nathaniel Jr. in 1696. This house was probably built by the younger Hovey. The asymmetrical layout of the front of this house is because Hovey built a half house and expanded it later. A modified Beverly jog is on the left.… END_OF_DOCUMENT_TOKEN_TO_BE_REPLACED