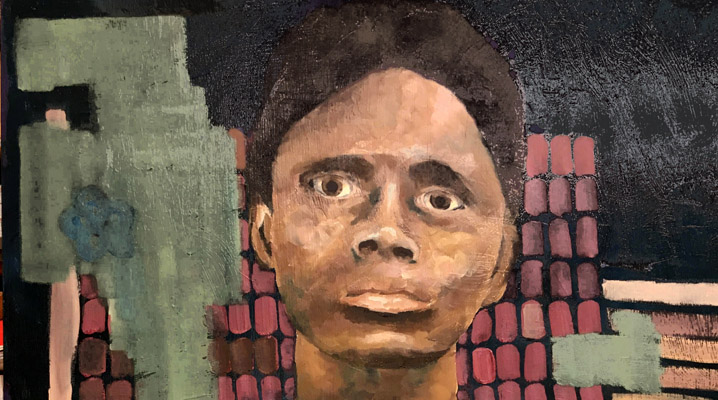 Jenny Slew was born about 1719 as the child of a free white woman and a black slave. She married one or more black men who were slaves but lived her life as a free woman until 1762 when she was taken and enslaved by John Whipple Jr. of the Hamlet, part of Ipswich that later became Hamilton.

Slew found a sympathetic attorney, Benjamin Kent and in March, 1765 sued Mr. Whipple in the Inferior Court of Common Pleas on a charge of trespass for holding her in bondage illegally. In the civil suit “Jenny Slew, Spinster, versus John Whipple Jr., Gentleman” she asserted through her counsel that as a child’s legal status follows that of the mother, she was a free woman. The complaint stated that “on Jan. 29, 1762 John Whipple with force and arms took her held and kept her in servitude as a slave in his service and thus restrained her of her lawful liberty and did other injuries to the amount of £25.” Although it is frequently written that Jenny Slew was kidnapped, “Force and Arms” is a legal phrase universally inserted in a writ of trespass.

Whipple countered that he possessed a bill of sale for the purchase of Jenny Slew, and that she had no legal standing to sue him since she had been married. Under Massachusetts law at that time a married woman had no legal identity separate from her husband and therefore could not sue on her own behalf. The court dismissed her petition on a technicality, ruling that since Jenny had been married ,”Jenny Slew, Spinstress” did not exist.

A year later Jenny Slew filed an appeal with the Essex Superior Court of Judicature in Salem, which granted her a jury trial. The court took into consideration that she had not been married at the times of the two trials, and that under the state’s 1705 anti-miscegenation statue, “For Better Preventing of a Spurious and Mixt Issue” (which remained in effect until 1843), marriage of a slave to a woman born of a white mother was of questionable validity, deciding that she was therefore a “spinster.” In November of 1766 the jury ruled in favor of the plaintiff and ordered Whipple to free Jenny Slew. She was awarded £4 in damages and £5 in costs. Her lawyer was Benjamin Kent, who took several cases of slaves suing their masters for illegal enslavement. Kent based his successful argument on the issue of trespass, telling judge Peter Oliver, who was a slave owner, “I shall not enter into the right of some men to slave others.” Kent won the case because Whipple failed to produce a bill of sale for the ownership of Jenny Slew.

Present in the Salem courthouse during the 1765 trial was a lawyer named John Adams, who took notes on the proceedings: “Attended Court, heard the trial of an action of trespass, brought by a mulatto woman, for damages, for restoring her liberty. This is called suing for liberty; the first action that ever I knew of the sort, though I have heard there have been many.” Adams noted that Judge Oliver stated, “This is a contest between liberty and property—both of great consequence, but liberty of most importance of the two.” Adams was a close friend of Benjamin Kent, who encouraged him to included in the draft for the Massachusetts State Constitution 14 years later a declaration of rights stating that “all men are born free and equal.”

John Whipple’s relative Matthew Whipple (1685-1766), who also lived in the Hamlet, changed his will in 1760 to provide that after his and his wife’s death their slave Plato “shall be free if he desires it and if he don’t he shall have Liberty to live with any of my friends whom he pleases and I give him liberty to live in my east kitchen.” Plato was to receive several items, including a cow and “a good Pasture for her and liberty to cut hay sufficient for her” and if Plato could no longer support himself comfortably, Whipple’s heirs were to grant him “whatever he shall stand in need of.” When Plato died in 1799, he was said to be 109 years of age.

Jenny Slew is believed to have been the first person held as a slave to be granted freedom through trial by jury, and the people of Massachusetts were becoming increasingly anti-slavery. Article 1 of the Constitution of Massachusetts adopted in 1780 declared that “All men are born free and equal, and have certain natural, essential, and unalienable rights.” The General Court (legislature) passed an Act in March 1788 to prevent the slave trade and “granting relief to the families of such unhappy persons as may be kidnapped or decoyed away from this Commonwealth.”

Who was John Whipple?

Captain John Whipple Jr. (1717-1794), was a descendant of early Ipswich settler Matthew Whipple, whose brother John Whipple constructed the Whipple House on the South Green of Ipswich. They received from the Town a grant of 200 acres in the Hamlet, which is now the town of Hamilton. Matthew Whipple settled there, where the family prospered and was greatly involved in town affairs. The 1680 home of Matthew Whipple is still standing.

A list of slaves and slave-holders in the book Ipswich in the Massachusetts Bay Colony includes the Whipple family:

Who was Jenny Slew?

John Adams wrote that Jenny Slew was believed to be the daughter of “Betty Slew.” The Vital Records for Ipswich through 1850 do not list anyone with the surname Slew among births, marriages and deaths, nor is the name Slew found in Ipswich history other than in the case of Jenny Slew.

The only deed listing for the surname Slew is found in Beverly, spelled as Slew and Sloo. On February 21, 1728, seven “children and grandchildren of William Hoar, late of Beverly,” assigned 5/7 of William Hoar’s commonage in the common lands of Beverly to Peter Pride of Beverly for “ten pounds procured bills of credit.” Among the names were brother and sister Leonard and Rachel Slew. Each person ratified the deed with a mark, signifying that they were illiterate. (Salem Deeds 55:10).

William Hoar married Sarah Ross, June 3, 1685. The records show only four daughters born to William and Sarah: Abigail, Mary, Rebecca and Sarah, who oddly, are all listed as having been born on February 2, 1695. The Records of the Quarterly Courts of Essex County indicate that several members of the Hoar family were charged with petty thievery. In 1692 Dorcas Galley Hoar, a fortune teller and accused thief who married into the Hoar family of Beverly was accused of being a witch in the Salem Witchcraft trials, but her sentence was stayed and she was eventually released. One of the children of Dorcas Hoar was Tabitha, aka Tabith, or Tabby, who married Leonard Slew, and is found in courts records charged with thievery from the family for whom she worked. Although they died in an Indian attack after moving to Maine, they had two children, also named Leonard and Rachel, who are the parties listed in the 1728 deed.

Jeanne Pickering, who has a Master’s degree in history at Salem State University, speculates that Rachel Slew was the mother of Jenny Slew. Although the Hoars and Slews lived on the margin of society, Rachel Slew’s mother, Rachel, the wife of Leonard, was baptised as a member of First church in Beverly in 1706. Rachel Slew, presumably the daughter, was received into full communion in 1721. There is no documentation regarding the black man who was Jenny Slew’s father, or the identity of her own two husbands, other than that they were “Negro.”

In researching Jenny Slew, I uncovered a remarkable history. Born to a troubled Beverly family, her earliest known European relative arrived in Ipswich as a prisoner of Cromwell’s war. Her great grandmother ran a burglary ring and was sentenced to be hung as a witch. Her grandparents were killed in an Indian uprising, and she was the offspring of an affair between their illiterate daughter and a slave. Being of mixed race, Jenny married a slave, probably worked as a household servant, and it was thus that she came to be kept against her will by John Whipple.

John Whipple’s ancestors, on the other hand, were granted 200 acres upon their arrival in Ipswich. They became so wealthy that their fine First Period homes are still standing. It’s ironic that a man so fortunate by birthright stole from this woman, Jenny Slew, the right to her freedom. And yet she found a lawyer, and took John Whipple to court. When she lost, she persisted and won on appeal, having to prove to the court that she was an unmarried woman and legally existed.

We know about this because another lawyer, John Adams, was in the courtroom that day. Adams frequently attended court in Ipswich, and always stayed at Treadwell’s Inn on North Main Street. Adams’ temperament was inclined toward reflection, but he married a most remarkable woman, Abigail Smith, who despite never receiving a formal education (because she was a woman), became his intellectual advisor, moral compass and pen pal.

Adams wrote to Abigail, Saturday, June 24, 1774, at Ipswich: “This afternoon, I have taken a long walk through the Neck, a fine tract of land. I wander alone and ponder. The objects before me are too grand and multifarious for my comprehension.” Adams’ dry legal notes about the Jenny Slew case don’t hint at his opinion, but he surely talked about it with Abigail, who was quite confident in her opinions!

In 1774 she wrote to him, “I wish most sincerely there was not a Slave in the province. We are daily robbing and plundering from those who have as good a right to freedom as we have.”

Two years later, she added, “And by the way! In the new code of laws, I desire you would remember the ladies and be more generous and favorable to them than your ancestors. Remember, all men would be tyrants if they could.”

John Adams was a member of the “Committee of Five” appointed to draft the Declaration of Independence. Thomas Jefferson’s rough draft, with changes made by Benjamin Franklin and John Adams, is housed at the Library of Congress. John Adams personally drafted the 1780 Constitution of the Commonwealth of Massachusetts, the world’s oldest functioning written constitution. It begins with “A Declaration of the Rights of the Inhabitants of the Commonwealth of Massachusetts, and states that “All men are born free and equal, and have certain natural, essential, and unalienable rights.” Surely John Adams was influenced by two very different women: one to become a famous First Lady, the other being the daughter of an illiterate mother and a slave.

1 thought on “Freedom for Jenny Slew”