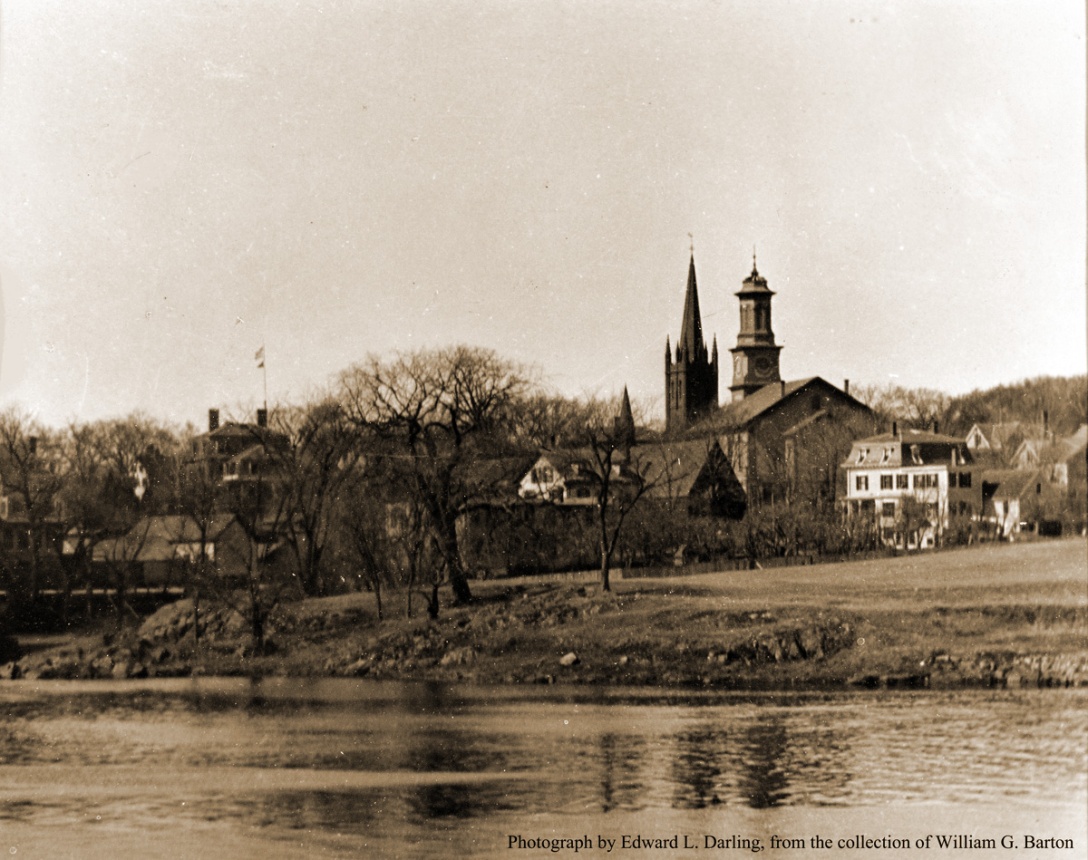 The Congregational Church, founded by the first settlers, maintained the old order for many generations in undisputed supremacy. From time to time, as the population increased, as has been noted, new Parishes within the Town limits had been established, in Chebacco, now Essex, in the Hamlet, now Hamilton, in Linebrook, and finally the South Parish in the center of the Town, but these were all Congregational, holding firmly to the Puritan order.

A number of friends and Neighbors having met together at the mutual desire of each other for the purpose of forming a “Society to Unite in Religious worship of the Supreme Being” formed themselves into a Religious Society. The peace of quiet Ipswich was disturbed and much bitterness was interjected into the religious life, but the Baptist people proceeded steadily to establish their Church. The services of worship were held in the second story of the building, which Dr. Manning had built for a woolen mill, on the corner now occupied by Caldwell’s Block.

The withdrawal of parishioners from the First and South Parishes caused a considerable loss of revenue, but stable prosperity was never secured, and the plans for building a Baptist meeting-house did not materialize. A secession took place from the Church in 1816, and in the course of this year they dissolved. The original Society of Baptists continued after the secession from them only one year. In 1892, the Baptist people again began to worship together.

When the Baptist Church was virtually extinct, some of the leading members of that body turned to the Methodist order, which was then becoming prominent in Essex County. In 1829 and 1830, many Ipswich families joined the new Methodist Church.

During his pastorate, the famous revivalist Rev. John N. Maffit held a “protracted meeting” as it was called, which was undoubtedly the most extraordinary episode in the history of the churches of Ipswich since the days of Whitefield and Tennent. He preached sixty nights to congregations which occupied every inch of the meeting-house. It is said that during an entire week, business was at a stand still, most of the stores were closed, the cotton mill was shut down for want of help, and every one seemed to be seeking the kingdom of God and His righteousness.

The novel methods and great excitement, incident to these meetings, roused great opposition among those unfriendly to Methodism. Denominational rivalry grew more acute with the growth of the Methodist Society, and in 1838 Rev. Kimball of the Congregational Church betrayed his feelings in a sermon in which his animus against the Methodists was too thinly veiled.

A sharp repartee from Rev. Daniel Wise of the Methodist Church followed and the pews were not slow to array themselves under their respective champions. Denominational tailors and barbers had their exclusive patrons and the anti-slavery bickering added further bitterness to the sharp variances of the time.

“The Independent Congregational Society,” was organized in the Spring of 1830. Services of worship were held in the Court House. The new enterprise prospered and in March, 1832, Nathaniel A. Millett bought the lot, now occupied in part by the Old Town Hall. A meeting-house was built at once. Much bitter feeling was aroused by the Unitarian controversy.

The Town was divided into hostile camps, each of which patronized its own shops and tradesmen. William P. Dennis was the Unitarian barber. Nathaniel Millett, the tailor, it has been said, came to Ipswich, to make clothes for his Unitarian friends, and the Orthodox portion of the community left them alone. Old friendships cooled. The peace of the churches was destroyed.

The Unitarian doctrine failed to establish itself in the old Puritan town. In a few months less than ten years, the congregation had dwindled, the financial foundation had failed, and the meeting-house was sold to the Town and used as a Town Hall. In 1866. a strip was acquired on the south side of the lot and the Town Hall was removed to the center of the lot, remodeled and enlarged to its present form.

As the emancipation issue grew in advance of the Civil War, dissatisfaction of a large minority of the Methodist became so pronounced that twenty-five members eceded, declaring that they could no longer hold fellowship with slave holders or their defenders. They joined what was then called “The Methodist Wesleyan Church in the United States,” and met for worship in the small hall owned by Mr. Hammatt, which then stood on the northeast comer of his lot on North Main St. They maintained their independence for several years, despite the opposition of the old Church, but returned when, as they believed, the righteousness of their contention was recognized.

In 1843, though the dissatisfied portion had withdrawn, the Methodist Church was not perfectly harmonious. The vestry was frequently used for anti-slavery meetings and the “diversity of feelings regarding letting the House for any but strictly religious meetings.” A new outbreak of disorder occasioned the appointment of a Committee in April, 1855, to see “that our meetings be not disturbed by persons disposed so to do,” and in the following April, the Selectmen were requested to appoint John A. Newman a special police officer “to see that order be restored in our evening meetings.”

Mr. Spofford remarks in his Reminiscences of this period “No one at this day, unless he be old enough to remember can have any idea of the bitterness of the contentions which took place with regard to the abolition of slavery.”

Services of worship in the Episcopal form were held for a time prior to the year 1850, but were given up for lack of proper support. A decade went by, and the Trustees of the Methodist Church allowed the use of their house of worship. Services of worship continued to be held in Damon’s Hall, in the old Court House, which had been removed to Depot Square and was later destroyed by fire, and later in the Town Hall. The year 1874 is sometimes alluded to as the birth year of the Church. Evidently its work was taken up with fresh enthusiasm. The Bishop consecrated the house of worship as the Ascension Memorial Church, in memory of Dr. Smith, on June 21, 1883.