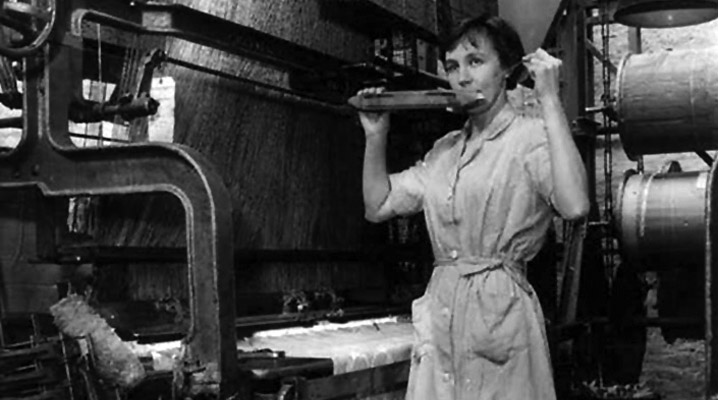 Featured image: “Kissing the shuttle” was the process by which weavers sucked thread through the eye of a shuttle when the pirn (bobbin) was replaced.

The Kiss of Death Story

The following article is from The Kiss of Death Story by Horatio Rogers, M.D. for Old Time New England, Volume LXI, #2, Fall 1970.

“A person of a historical turn of mind living in the Merrimack Valley can hardly escape becoming interested in the early days of the textile industry, which once flourished here. Among the fascinating details bound to come to his attention is the story of the “kiss of death” shuttle. Since the Middle Ages, a boat-shaped object called a shuttle has been used to carry the weft thread across the loom in the process of weaving cloth. This shuttle contained a hollow space for holding the spool of weft thread and a hole or “eye” through which the loose end of the thread emerged.

The weaver, after loading a new pirn wrapped with thread into a shuttle, drew the loose end through the hole with the breath. No one would object to this unsanitary habit so long as weaving took place only in the weaver’s home. Even later on, when professional weavers were brought together in “manufactories” and later still in the weave rooms of textile mills, no one saw reason to object.

Certainly no one connected this habit with the observation, made sometime in the nineteenth century, that weavers were dying of what was then called consumption at a higher rate than was the general public. In 1882 the German bacteriologist Robert Koch succeeded in isolating the tubercle bacillus from the sputum of consumptive patients. Tuberculosis became known as “the Great White Plague.” Popular campaigns complete with exhibits were staged against it by Public Health agencies, even in small towns.

Photo above provided by the New England Historical Society. Lewis Hine took this photo in April 1909 of a young at Interlaken Mill, Arkwright, R. I.

At about this time observers remembered about the weavers’ habit of sucking the thread end through the shuttle and realized that by contaminating a number of shuttles a single tuberculous weaver could infect a whole weave room. Owners and superintendents of textile mills quickly made rules against the old practice of sucking through. As might be expected, they were largely ignored. In some mills each weaver was provided with a small metal hook with which to pull the weft end through the shuttle eye. Weavers still preferred the “good old way.”

Massachusetts passed Chapter 281 of the Acts of 1911, making the use of the kiss of death shuttle unlawful.

Commonwealth of Massachusetts Acts of 1911, Chapter 281: “An Act to Prohibit the Use of Suction Shuttles in Factories”

Section I. It shall be unlawful for any proprietor of a factory or any officer or agent or other person to require or permit the use of suction shuttles, or any form of shuttle in the use of which any part of the shuttle or any thread is put in the mouth or touched by the lips of the operator. It shall be the duty of the state board of labor and industries to enforce the provisions of this act.

Section 2. Violations of this act shall be punished by a fine of not less than fifty dollars for each offense.

It was not until the introduction of the self-threading shuttle that the problem was finally solved. Modern looms now reload the empty shuttle automatically, and modern shuttles re-thread themselves. The “Kiss of Death” shuttle had its day, and take its place with the vast company of solved problems which mark the progress of textile history from the earliest times.”

The Toll of Tuberculosis

An estimated 110,000 Americans died each year from tuberculosis in the 1900s. In 1921, the publication, “Textile World,” announced a campaign to reduce tuberculosis among factory workers, and included shocking statistics in the United States Department of Labor report, ” Causes of Death by Occupation.” before the age of 35.

The Willowdale Mill - In 1829, Dr. Thomas Manning of Ipswich constructed a 6' tall dam and mill on the Ipswich River along Topsfield Rd. Workers were provided housing a the large stone house. In 1884 the mill building burned and much of the stone walls for the mill building collapsed. … END_OF_DOCUMENT_TOKEN_TO_BE_REPLACED 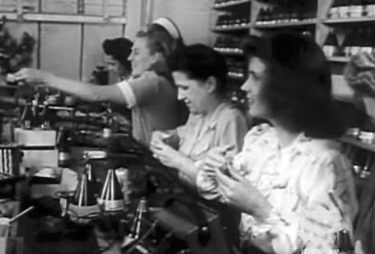 The Proximity Fuze: How Ipswich women helped win WW II - The former Ipswich Mills, now owned by EBSCO, was the site of one of the most closely guarded secrets of the Second World War.… END_OF_DOCUMENT_TOKEN_TO_BE_REPLACED

The Mill Road Bridge and the Isinglass Factory - The triple stone arch Warner Bridge that connects Mill Rd. in Ipswich to Highland St. in Hamilton was constructed in 1829, and rebuilt in 1856. The isinglass mill sat on the downstream Ipswich side of the bridge.… END_OF_DOCUMENT_TOKEN_TO_BE_REPLACED

I received the ribbon you sent me by mail, and I thank you ever so much for it. I was asking Asa Howe who you were, and he told me. He also said you were a great man for girls. How is it you never holler at me and my chums? I think you're bashful. If you wasn't, you would of handed me the ribbon instead of sending it by mail. 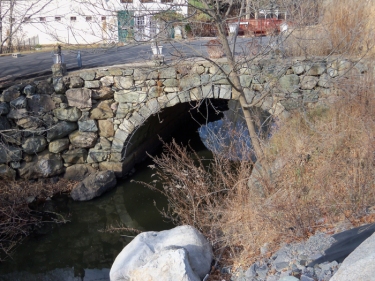 The Jewel Mill and Stone Arch Bridge - In 1642, a dam and fulling mill were built on the Mill River in Rowley. The stone arch bridge on this property was constructed between 1850 and 1870.… END_OF_DOCUMENT_TOKEN_TO_BE_REPLACED 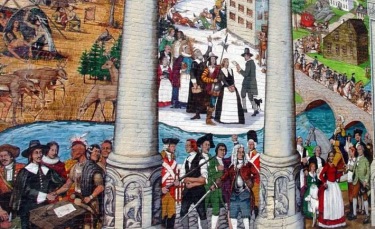 The Ipswich Riverwalk mural - In 2005 EBSCO Publishing commissioned artist Alan Pearsall to paint a 2,700-square-foot mural on one of the old mill buildings occupied by the company in Ipswich. The mural is the centerpiece of the town's Riverwalk. … END_OF_DOCUMENT_TOKEN_TO_BE_REPLACED 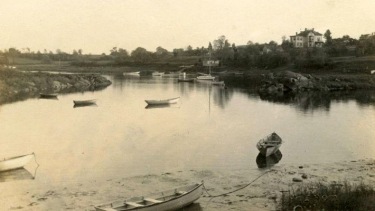 The Ipswich River - The 35-mile Ipswich River flows into the Atlantic Ocean at Ipswich Bay. The Ipswich River Water Association works to protect the river and its watershed. Foote Brothers Canoes on Topsfield Rd provides rentals and shuttle service from April to October.… END_OF_DOCUMENT_TOKEN_TO_BE_REPLACED

The Hayes Hotel - The Hayes Hotel was constructed in 1842 as a woolen goods factory. Converted to a tavern and hotel in 1885, the building was being used as a rooming house when it burned in 1969 with a loss of life.… END_OF_DOCUMENT_TOKEN_TO_BE_REPLACED

The Greek Hotel - In 1868, the Ipswich Mills built a "fine mansion" for the use of its superintendent. By 1910 the building had become a tenement upstairs and coffee shop downstairs. The house was replaced by a succession of three diners, but the lot is now a parking lot.… END_OF_DOCUMENT_TOKEN_TO_BE_REPLACED

The Burke Heel Factory and Canney Lumber Fire, June 19, 1933 - The factory at Brown Square burned after volatile glues burst into flames. In the adjoining lot was the Canney Lumber Co. where the building lumber were destroyed. The smaller brick building on the right survived and is now the Ipswich Ale Brewery.… END_OF_DOCUMENT_TOKEN_TO_BE_REPLACED 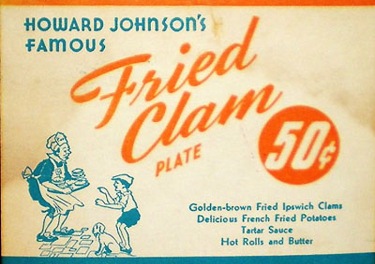 Soffron Brothers Ipswich Clams - Soffron Brothers were the exclusive suppliers of clams to the Howard Johnson chain for 32 years, which featured Ipswich Fried Clams on the menu. The four brothers, Tom, George, Pete and Steve, were the children of Greek immigrants who came to work at the Ipswich mills. Their Ipswich factory was at Brown Square in the building that now houses the Ipswich Ale Brewery.… END_OF_DOCUMENT_TOKEN_TO_BE_REPLACED

Police open fire at the Ipswich Mills Strike, June 10, 1913 - On June 10, 1913, police fired into a crowd of protesting immigrant workers at the Ipswich hosiery mill. A young Greek woman named Nicholetta Paudelopoulou was shot in the head and killed by police. Fifteen persons, including the local leaders of the I.W.W. were taken into custody.… END_OF_DOCUMENT_TOKEN_TO_BE_REPLACED 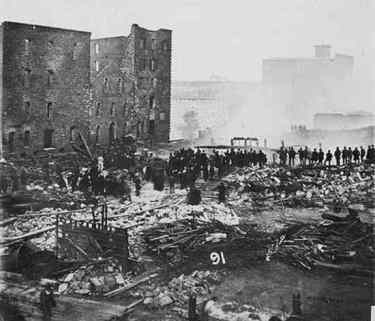 January 12, 1912: Lawrence Bread and Roses strike - On January 12, 1912, the labor protest later known as the "Bread and Roses" strike began in Lawrence, MA. Violent methods were used to suppress the protest, but the strikers maintained their solidarity.… END_OF_DOCUMENT_TOKEN_TO_BE_REPLACED

Ipswich during World War II - The end to the Great Depression coincided with America's entry into World War II. The Ipswich Guard was stationed on Old England Rd., and Sylvania employees worked on a top-secret project. Minesweepers and other small craft were produced at Robinson's Boatyard. … END_OF_DOCUMENT_TOKEN_TO_BE_REPLACED 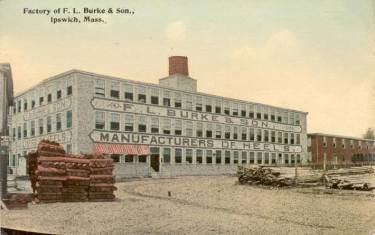 Hammatt Street, Brown Square and Farley Brook - Until the second half of the 19th Century, much of the area bounded by Central Street, Washington Street, Mineral Street and Market Street was a wetland with an open sewer known as Farley Brook running through it.… END_OF_DOCUMENT_TOKEN_TO_BE_REPLACED 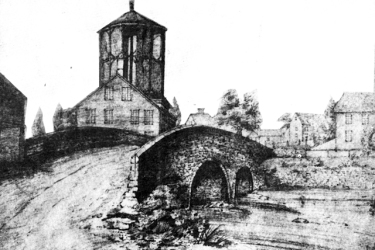 Dr. Manning’s windmill - In 1792, Dr. John Manning erected a factory at the corner of South Main and Market Street beside the Choate Bridge and began manufacturing cloth and blankets. On the roof squatted a great octagonal tower, inside of which was a horizontal windmill.… END_OF_DOCUMENT_TOKEN_TO_BE_REPLACED 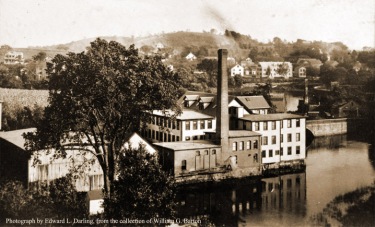 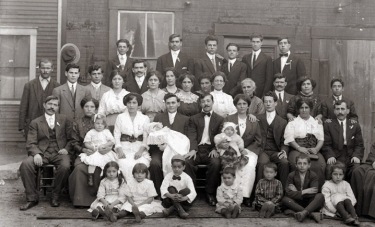 A town of immigrants - Puritans founded Ipswich during the “Great Migration” of the early 17th Century. Many residents of the town descend from immigrants who arrived in the late 19th and early 20th centuries to work in the mills.… END_OF_DOCUMENT_TOKEN_TO_BE_REPLACED

A photographic history of the Ipswich Mills Dam - Until 350 years ago, the Ipswich River ran unencumbered from its origin 35 miles upstream, carving its way through a 148-square-mile watershed. Herring, shad, salmon and alewife swam upstream to spawn. Thomas Franklin Waters noted that, “Great shoals of alewives came up the river in the Spring and were seined at night by the light… END_OF_DOCUMENT_TOKEN_TO_BE_REPLACED 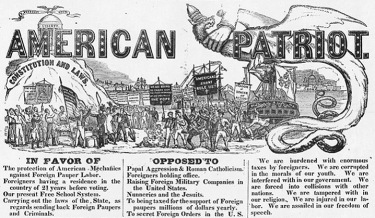 1854: Anti-immigrant Know Nothing Party sweeps Massachusetts elections - Prejudice disguised as patriotism repeats itself in American politics. In 1854, the "Know Nothing" American Party formed in opposition to Irish immigration and carried local elections in New England communities. They swept the state of Massachusetts in the fall 1854 elections but were defeated two years later.… END_OF_DOCUMENT_TOKEN_TO_BE_REPLACED

“Kiss of Death” at New England textile mills - The weaver, after loading thread into a shuttle, drew the loose end through the hole with her breath. No one connected this habit with the observation that weavers were dying of consumption, known now as tuberculosis.… END_OF_DOCUMENT_TOKEN_TO_BE_REPLACED

15 thoughts on ““Kiss of Death” at New England textile mills”