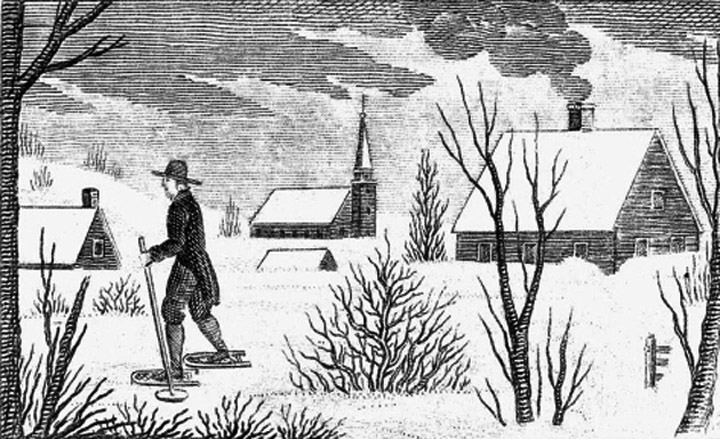 Joshua Coffin’s history of Newbury recounts the romantic tale of Abraham Adams who walked three miles to visit his new wife Abigail, snowbound in her parents’ home during the Great Snow which began on the 21st of February, 1717. Snow fell up to six feet deep, with drifts as high as 25 feet, covering some houses over as high as their chimneys!

1717: This year is rendered memorable, by the unusual quantity of snow, which fell on the twentieth and twenty-fourth of February. In these two storms, the earth was covered with snow, from ten to fifteen feet, and, in some places, to twenty feet, deep. Many one-story houses were covered, and, in many places, paths were dug, from house to house, under the snow. Many visits were made, from place to place, by means of snow shoes, the wearers having first stepped out of their chamber windows, on these excursions.

Love, we know, “laughs at locksmiths,” and, of course, will disregard a snow-drift. Tradition informs us, that a Mr. Abraham Adams, wishing to visit his “lady love,” Miss Abigail Pierce, mounted his snow shoes, took a three-mile walk, for that purpose, and entered her residence as he left his own, namely, by the chamber window. He was the first person the family had seen from abroad, for more than a week.

Historic New England reports that the couple had their first child on Nov. 25, 1717, nine months after the Great Snow.

Cotton Mather declared it to be “as mighty a snow as perhaps has been known in memory of man.” His account of the Great Snow of February, 1717 is recorded in “The history and antiquities of New England, New York, New Jersey, and Pennsylvania” by John Warner Barber, 1798-1885.

“On the twentieth of the last February there came on a Snow, which being added unto what had covered the ground a few days before, made a thicker mantle for our Mother than what was usual: And ye storm with it was, for the following day, so violent as to make all communication between ye Neighbors every where to cease. People, for some hours, could not pass from one side of a street unto another, & ye poor Women, who happened in this critical time to fall into Travail, were putt unto Hardships, which anon produced many odd stories for us.

But on ye Twenty-fourth day of ye Month…Another Snow came on which almost buried ye Memory of ye former, with a Storm so famous that Heaven laid an Interdict on ye Religious Assemblies throughout ye Country, on this Lord’s day, ye like whereunto had never been seen before. The Indians near a hundred years old, affirm that their Fathers never told them of any thing that equalled it.

Vast numbers of cattle were destroyed in this Calamity. Whereof some there were, of ye Stranger sort, were found standing dead on their legs, as if they had been alive many weeks after, when ye Snow melted away. And others had their eyes glazed over with Ice at such a rate, that being not far from ye Sea, their mistake of their way drowned them there.

One gentleman, on whose farms were now lost above 1100 sheep, which with other cattle, were interred in the Snow, writes me word that there were two Sheep very singularly circumstanced. For no less than eight and twenty days after the Storm, the People pulling out the Ruins of above an 100 sheep out of a Snow Bank, which lay 16 foot high, drifted over them, there was two found alive, which had been there all this time, and kept themselves alive by eating the wool of their dead companions. When they were taken out they shed their own Fleeces, but soon got into good Case again.

Sheep were not ye only creatures that lived unaccountably, for whole weeks without their usual sustenance, entirely buried in ye Snowdrifts. The Swine had a share with ye Sheep in strange survivals. A man had a couple of young hogs, which he gave over for dead, But on the twenty-seventh day after their Burial, they made their way out of a Snow-Bank, at the bottom of which they had found a little Tansy to feed upon.

The Wild Creatures of ye Woods, ye outgoings of ye Evening, made their Descent as well as they could in this time of scarcity for them towards ye Sea-side. A vast multitude of Deer, for ye same cause, taking ye same course, & ye Deep Snow Spoiling them of their only Defence, which is to run, they became such a prey to these Devourers, that it is thought not one in twenty escaped.

But here again occurred a Curiosity. These carnivorous Sharpers, & especially the Foxes, would make their Nocturnal visits to the Pens, where the people had their sheep defended from them. The poor Ewes big with young, were so terrified with the frequent Approaches of ye Foxes, & the Terror had such Impression on them, that most of ye Lambs brought forth in the Spring following, were of Monsieur Reinard’s complexion, when ye Dam, were either White or Black.

It is remarkable that immediately after ye Fall of ye Snow an infinite multitude of Sparrows made their Appearance, but then, after a short continuance, all disappeared. It is incredible how much damage is done to ye Orchards, For the Snow freezing to a Crust, as high as the boughs of ye trees, anon Split ym to pieces. The cattle also, walking on ye crusted Snow a dozen foot from ye ground, so fed upon ye Trees as very much to damnify them.

The Ocean was in a prodigious Ferment, and after it was over, vast heaps of little shells were driven ashore, where they were never seen before. Mighty shoals of Porpoises also kept a play-day in the disturbed waves of our Harbours. The odd Accidents befalling many poor people, whose Cottages were totally covered with ye Snow & not ye very tops of their chimneys to be seen, would afford a Story.”

The Great Snow in Massachusetts

After the storm, search parties hunting for neighbors sometimes lost their bearings because they could not see any houses. A widow in Medford, Mass. with several children lived in a one-story house that was so deeply buried that it could not be found for several days. When it was reported that smoke had been seen coming out of a snowbank, neighbors rushed to her house with shovels. Upon entering, they found that she had resorted to burning furniture to keep her children warm.

Wild animals suffered from the prolonged winter and began attacking livestock, which farmers were forced to keep indoors. Deer too, were victims of the carnivores, and were herded into barns for their safety. In the spring, cattle were found frozen erect in their tracks. The Post Road from Newbury to Boston, passing through Ipswich, remained impassable until the middle of March.