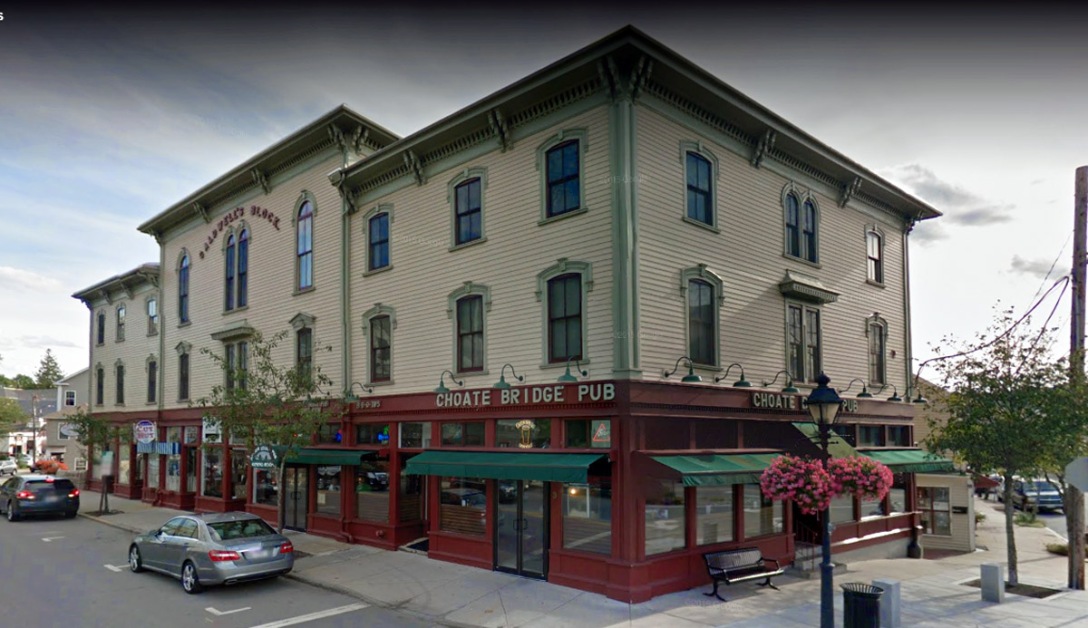 The Caldwell Block at the corner of South Main and Market Street is the oldest large building in the commercial section of Ipswich. The photos below show that despite the change of establishments, the building remains easily identifiable. The Choate Bridge Pub anchors the corner now, but when John Updike had his office upstairs, it was the Dolphin Restaurant.

The building was constructed by Col. Luther Caldwell, who grew up in Ipswich and became well known as a journalist and in Elmira NY.

Listing on the National Register of Historic Places

The Caldwell Block is the earliest commercial building in Ipswich designed as a commercial structure and continuously maintained for commercial and office uses. It retains many of the fine Italianate features of the original design. Among these are label moldings, paired round-headed windows in the three center bays, and an elaborate cornice with paired brackets between the bays. The facade and side elevations were faced with flush boarding treated to look like cut stone, while the rear elevation was faced with clapboard. These original materials are most likely intact beneath the later asbestos siding. The storefronts were contained by a dentilled cornice and consisted of elaborate cast-iron frames, arched lights and recessed entrances. The storefronts have been greatly altered. The building’s prominent size, bold massing and elaborate detail are noteworthy.

The property has a long and significant history in the commercial development of Ipswich due to its strategic location adjacent to the major crossing of the Ipswich River at the Choate Bridge. As the oldest stone-arch bridge in North America, the crossing became an early center for commercial activity in the town.

The Caldwell Block stands on the site of the former Massachusetts Woolen Manufactory, constructed by Dr. John Manning in 1794. The property was sold to Stephen Coburn in 1847 and housed the post office and other shops. The building was destroyed by fire, and in 1869 the lot was sold to Col. Luther Caldwell and his wife, Almira Flint Caldwell. Col. Caldwell erected the present building in 1870 and named it the “Caldwell Block.”

Col. Luther Caldwell was born in Ipswich on September 17, 1822, died in 1903 and was buried in the High Street Cemetery. He was Clerk of the New York Assembly in 1867 and. Mayor of Elmira, New York in 187 3-74. He was editor and proprietor of the Elmira Daily Advertiser from 1864—70. He was an officer in the Civil War and a member of the convention that named Abraham Lincoln for President in 1860. He was secretary of the convention that named General Grant for President in 1868. He served as Chief of the Bond Division of the U.S. Post Office during the term of President Harrison, 1889-93, and authored the Anne Bradstreet Book, which was published in 1898.

The ground floor of the Caldwell Block has always contained commercial shops. Originally, these included the drug store of Eben R. Smith, J. E. Perkins’ boot and shoe shop, and the watch-repair shop of John Whippage. The second floor housed offices. From 1961-74 John Updike, one of America’s foremost contemporary writers, occupied office space in the building. During this time he wrote almost all his major works in the building. The third floor was constructed with a large meeting hall and banquet room to accommodate the Grand Army of the Civil War, which was located here until the Memorial Building was built.

In 1792 Dr. John Manning erected a factory at the corner of South Main and Market Streets beside the Choate Bridge, and began the manufacture of coarse cloths and blankets in 1794. The completed building was two stories high, 105 feet long and 32 feet wide. On the roof squatted a great octagonal tower, inside of which were the arms and sails of a horizontal windmill by which it was proposed to operate the machinery.

The design and location at the bottom of the hill were inefficient, and if it ever did operate, the rotating assembly would surely have been noisy. The business quickly proved unprofitable and was given up in 1800. Dr. Manning’s ambitious enterprise was eventually reduced to a row of mundane stores and offices known as the Coburn Block. The old building burned to the ground in 1862, and was replaced by the present Caldwell Block in 1869.

The windmill sketch was by 12-year-old Mary Jane Derby of Salem. Half a century later she drew the illustration of the Coburn block (minus the windmill), which was reproduced on the cover of the 1966 Annual Report.