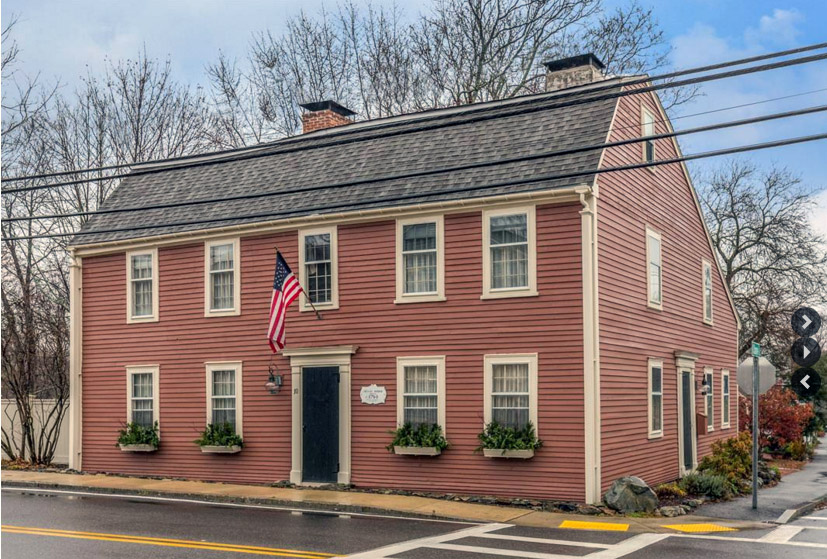 Thomas Franklin Waters wrote about the history of this lot: Richard Hubbard owned a goodly two acre tract bounded by Stony St., as it was then called, County St. and East St. This, he sold with a house to Ezekiel Rogers, son of Rev. Nathaniel Rogers, Jan. 28 1674 (Ips. Deeds 3 : 343). His daughter, Martha, sold the house and land to Thomas Dennis, May 16, 1685 (Ips. Deeds 5: 133). The deed specifies that it was “over against the sd. Dennis’s new dwelling house” which was on the lot now owned by the Ignatius Dodge heirs (*circa 1900). A succession of Dennis family members retained this property, John, Nathaniel and others, and the old house on the corner of County and Summer Streets is still known as the Dennis house.

Lydia Dodge was the daughter of Nathaniel Dennis and Mary Staniford. Lydia married John Newmarch in 1809. He died three years later, and she then married John Howard Dodge on Nov. 19, 1815 in Ipswich. Their son Captain Ignatius Dodge (1816 – 1901) inherited the house. He was captain of the ship “July Fourth.” The house remained in the family for years. In the early 1800’s, Eunice Hale maintained a school in the building.

A 1927 aerial photo shows 10 County St. with a large shoe shop that was attached to the rear. The rear ell is shown in the 1910 Ipswich map. In the 1884 Ipswich directory, the owner is George W. Spiller, shoe dresser, Farley & Daniels, 28 Summer St., corner of County St. the 1896 Ipswich Directory, the house was owned by George Spiller, retired.

Information from the MACRIS site, provided by the Ipswich Historical Commission in 1982:

“This houselot was in the possession of the Denniss family before 1685, when a deed to the abutting lot mentions Thomas Dennis’ “new Dwelling house” on the corner lot (5:133). Stylistic evidence indicates a mid eighteenth century date for the present house, the period when John Dennis owned the property. The cellar displays heavily chamfered timbers, probably re-used elements from the earlier house. The house is one of the best second period gambrels in Ipswich. The central hall has never been painted, and contains a fine staircase thought to be the work of the Dennis family of craftsmen.

John Dennis was a Harvard graduate (1730), and served as chaplain at Port St. George and Fort Frederick from 1737 to 1749. He was chosen school master in Ipswich in 1753. (It seems likely that the John Dennis appointed reading and writing master for the First Parish school in 1771 was another man.)

In the early 19th century Eunice Hale kept a school in the Dennis-Dodge House.
The Dodge in the house’s name comes from its mid-19th century occupant, Capt. Ignatius Dodge, master of the vessel “July Fourth.” The deed to this house contain preservation easements, inserted during its ownership by the Ipswich Heritage Trust.”