The oldest part of the house at 27 High St. is the east side, which may have begun as a one-room over-one-room floor plan as early as 1650, which if true would make it the second oldest house in New England. Edward Brown was the original owner of this site in 1639 and died in 1659. The actual construction date of the oldest section of the house is undetermined.

In the mid-18th century the west side of the house was built, completing the common central chimney, two-over-two configuration. Later a rear lean to was added, greatly increasing the depth of the house. Most of the present trim dates to the 18th century and early 19th century. The significant architectural features of this house are protected by an agreement between the owners and the Ipswich Historical Commission

Owners of the lot

Edward Brown came to Ipswich with the original settlers and married Faith Lord. Although he served as a Marshal of Ipswich, he and several other men were brought to court because their wives were seen wearing finery above their station. Puritan law required one to prove 200 pounds in savings to justify such extravagances. He made his will on 9 Feb, 1659 to his wife, Faith; sons Thomas, Joseph and John; and daughters, but no names mentioned, and his brother Bartholomew of whom he purchased the land on which this house sits.

Thomas Franklin Waters wrote about the Edward Brown house in his book, Ipswich in the Massachusetts Bay Colony Volume I: “The Edward Brown lot of one acre (was) southeast from Bradstreet. He had a son John, who resided in Wapping, England, in 1683, when he sold land in the common fields left by his father Edward, (Ips. Deeds 4: 533).

“Edward Browne was of Ipswich, colony of Massachusetts Bay, between 1654 and 1660, and is the same who from 1656 to 1659 bore the title of “Marshall’* Browne, indicating the office he held in the colony. He died February 9. 1659-60, in Ipswich, leaving a will which read, “My will is that after my said wife’s decease my son Joseph shall have and enjoy my dwelling house & appurtenances & privileges belonging there unto, together with all the rest of my land & meadow.” (The Probate records of Essex County, Massachusetts).

The will mentions his wife Faith and his brother Bartholomew, and his estate was appraised at a little more than £250.00. By comparison, the cost of Massachusetts houses constructed during that era ranged from £12 for modest homes to £200 to finer ones (“Prices and Wages by Decade“). His widow survived him and married second, July 1, 1660, Daniel Warner.” (Genealogical and personal memoirs relating to the families of Boston and eastern Massachusetts)

The widow Sarah Caldwell’s deed to her son Dillingham gives the eastern bound “land formerly Joseph Brown’s.” From the Probate Records, we learn that Joseph Brown (1) died before 1694, and that his estate was divided to his sons, John and Benjamin (Pro. Rec. 313: 559, .560), in 1721.

Joseph Browne, son of Edward and Faith Browne, born about 1639, was a turner, living in Ipswich, where he died September 30, 1694, at night. His estate inventoried two hundred seventy-five pounds five shillings. He married in Ipswich, February 27, 1671, Hannah Asselbie, who survived him. (Interestingly, the value of the estate of Joseph Brown had not improved significantly over that of his father.)

Children of Joseph Brown, all born in Ipswich:

John Brown, Turner, granted in his will, proved in 1758, to Elizabeth, his wife, “all the household goods she brought to me, and all the linen she hath made since I married her to be at her Disposal;” to his son John, the improvement of the two lower rooms and the northeast chamber and some real estate; to his daughter Esther Adams, and the children of his daughter Mary Lord, the household goods; and all the residue of real estate to his son Daniel (Pro. Rec. 335: 229). The house, barn and land were valued at £60 (Pro. Rec. 336: 17). Daniel Brown bequeathed the improvement of his property to his widow Hannah, during her life or until her second marriage.

Daniel Brown made his nephew, Daniel Smith, his sole heir. The will was approved, Jan. 4, 1796 (Pro. Rec. 364: 232). Daniel Smith’s will, proved in 1844, provided for the division of his estate among his sons, Daniel Brown Smith, Thomas and Benjamin, and the Probate Record contains this interesting item: ‘Daniel Smith was a Revolutionary pensioner, that he died on the 28th day of January, 1844, that he left no widow, and that he left seven children and no more, viz. Daniel B., Thomas, Benjamin, Polly Lord, Elizabeth Treadwell, Sarah Perkins, & Anna Kimball, and that they all of them are living and each of them is of full age” (Pro. Rec. 412: 315, 310).’

Thomas received the homestead, and occupied it until his death at a great age, when he bequeathed it to his nephew Charles Smith, who removed the old buildings and built his present residence in the rear of the site of the homestead. Daniel B. received a part of the house-lot and built a house upon it, which he sold to his son, Nathaniel P. Smith, March 1, 1866 (707: 16).

Homes of the Brown family of Ipswich

Brown Stocking Mill Historic District - At the beginning of the 20th century, Harry Brown established a hosiery mill and laid out Brownsville Avenue with 22 workers houses just south of his factory, which were added to the National Registry of Historic Places in 1996… END_OF_DOCUMENT_TOKEN_TO_BE_REPLACED 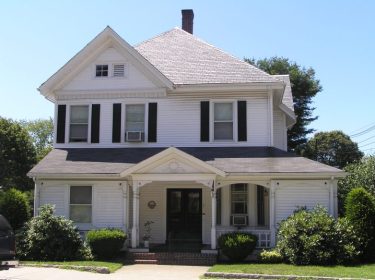 86 County Road, the Burnham – Brown house (1775) - This house was built in 1775 on a lot on Candlewood Rd., probably by Thomas Burnham. In 1821 Nathan Brown bought the house from Oliver Appleton, and 3 years later he removed it to its present site on County Rd. Brown and others enlarged and remodeled the old Burnham House, but some 18th century features remain. … END_OF_DOCUMENT_TOKEN_TO_BE_REPLACED

83 County Road, the Rogers-Brown-Rust House (1665-1723) - The house at 83 County Road is believed to be three houses joined together, at least one from the First Period. In 1836 the house and lot were conveyed to the South Parish as a church site. Asa Brown bought the house and removed it to its present location.… END_OF_DOCUMENT_TOKEN_TO_BE_REPLACED

82 County Road, the Brown – Manning house (1835) - The widow Judith Manning and single woman Mary Brown had the house at 82 County Rd. built for them in 1835. It remained in the family until the late 19th century.… END_OF_DOCUMENT_TOKEN_TO_BE_REPLACED

68 Essex Rd., the Levi Brown house (1832) - George W. Heard sold an acre and a half to Levi Brown, who had bought a half acre from his father, March 21, 1832. He built a dwelling and other buildings. … END_OF_DOCUMENT_TOKEN_TO_BE_REPLACED 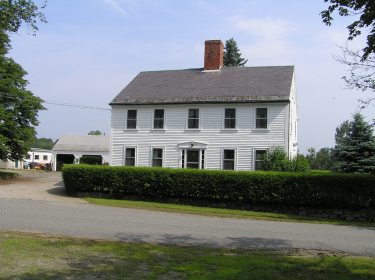 56 Fellows Road, the Josiah Brown house, (1812) - The pasture land along Fellows and Candlewood Roads was purchased in the mid-17th Century by John Brown. His descendant Josiah Brown built this house in 1812. For over two hundred and forty years after John Brown bought the farm, it remained by inheritance in the Brown family through successive generations.… END_OF_DOCUMENT_TOKEN_TO_BE_REPLACED 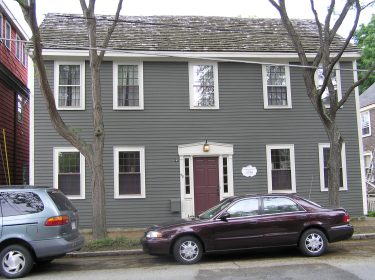 50 North Main Street, the James Brown house (1700 / 1721) - The James Brown house is part of a larger 1700 house that was divided into three houses in the late 18th Century. The chamfered oak frame in the southern portion indicates late First period, while the northern section appears to date from the 1720s. The Morley house next door was separated and turned sideways. … END_OF_DOCUMENT_TOKEN_TO_BE_REPLACED

41 Washington Street, the George Brown house (1883) - John A. Brown sold this lot to George B. Brown in 1883 and he built a house shortly thereafter. Brown’s house is one of the few Stick Style Victorian homes in Ipswich. Brown built a grist mill, also located on Washington St., in 1881. He started with a single team and by 1888 employed 6 men. Brown was the first in the area to install a roller mill, which removed all foreign iron substances from the grain before it entered the mill… END_OF_DOCUMENT_TOKEN_TO_BE_REPLACED

37 Washington Street, the Brown-Grossman-Doucette house (1884) - This house was built by 1884 by George V. Brown, one of several houses he built on a large parcel. Brown operated a large hay & grain business nearby at Brown Square and lived on Liberty Street. In 1916 this house was occupied by Charles (& Mary) Grossman and Denis (& Maggie) Doucette.… END_OF_DOCUMENT_TOKEN_TO_BE_REPLACED 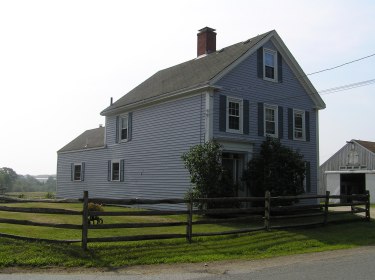 3 Candlewood Rd., the Brown-Whipple house (1812) - Joseph Brown built this house in 1812 as a dwelling for his son, James, and sold him the house and 3 acres, Dec. 23, 1817. The entire estate of Joseph Brown eventually was inherited by James. In 1852, D. F. Brown and the other heirs sold their interest to Hervey Whipple, who had married Martha P., daughter of James Brown, July 3, 1852. The heirs of Hervey Whipple still occupied into the 21st Century. … END_OF_DOCUMENT_TOKEN_TO_BE_REPLACED

27 High Street, the Edward Browne House (c 1650-1750) - Edward Brown was the original owner of this site in 1639, and the east side of the present house is believed to have been constructed under his ownership around 1650 as a one-room over-one-room floor plan. In the mid-18th century the west side of the house was built. Architectural features of this house are protected by a preservation agreement between the owners and the Ipswich Historical Commission. … END_OF_DOCUMENT_TOKEN_TO_BE_REPLACED

232 Argilla Road, the Patch-Brown-Crockett house (c 1760-85) - John Patch died in 1799 leaving the Sagamore Hill farm to his grandson Tristram Brown, who built the dwelling, which he operated as a boarding house on the way to the beach. Dr. Eugene A. Crockett bought the property along with its dairy and hay farm in November 1897. … END_OF_DOCUMENT_TOKEN_TO_BE_REPLACED

14 Candlewood Road, the Joseph Brown and Elizabeth Perkins house (1779) - Elizabeth Brown, descendant of the early Candlewood settler John Brown, was the wife of Captain Perkins, and gained possession of this lot. In December, 1779, their daughter, Elizabeth, became the wife of Joseph Brown, of the same family line, who built this house.… END_OF_DOCUMENT_TOKEN_TO_BE_REPLACED 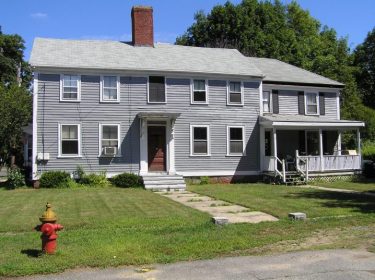 11 Topsfield Road, the Jacob and William G. Brown house (b 1832) - William Gray Brown, occupied this house after his fathers death and continued his father’s ice and coal business. He also owned and operated the Agawam House hotel facing Meeting House Green. The turret and porch are Victorian additions.… END_OF_DOCUMENT_TOKEN_TO_BE_REPLACED