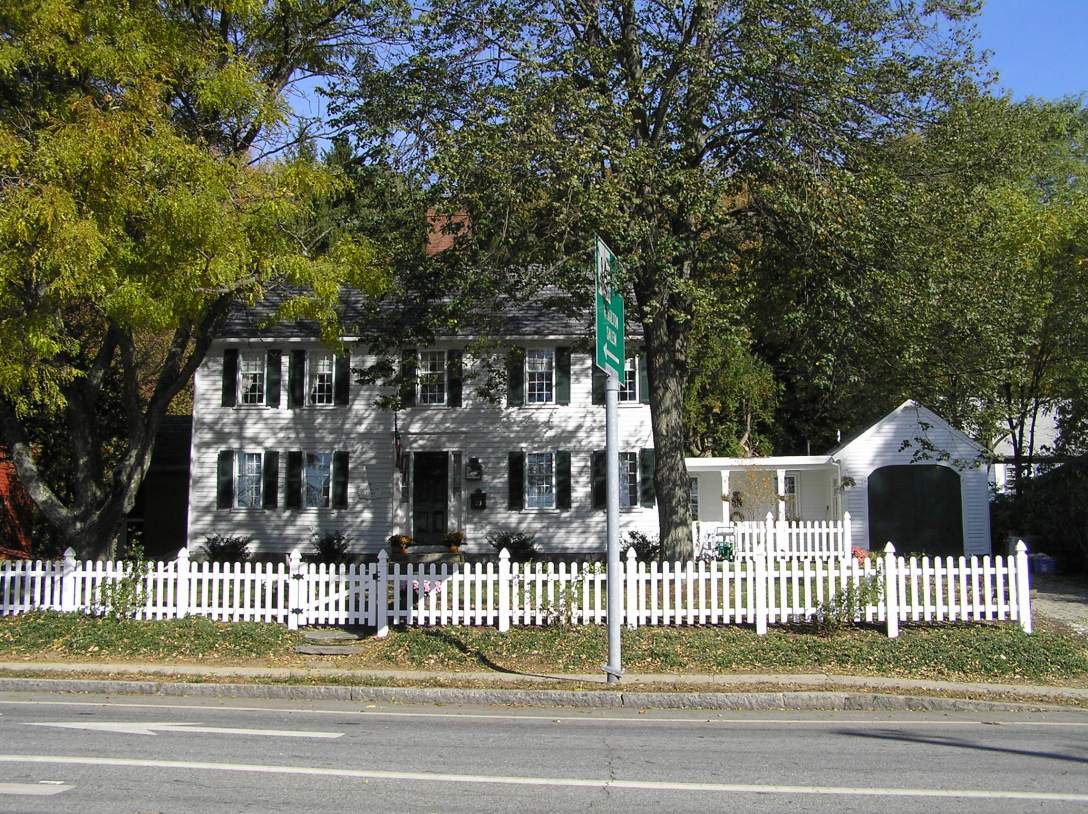 The house at 73 High Street is named after Nathaniel Lord who graduated from Harvard and spent 36 years as the Register of Probate in the Ipswich Court. His sons all entered the legal profession and one followed him in the same position. In 1824 General Lafayette visited our town and was met by a crowd assembled at the South Green where he was addressed by Nathaniel Lord Esq.

Thomas Franklin Waters recorded the following in Volume II of “Ipswich in the Massachusetts Bay Colony”:

Daniel Noyes taught the Grammar School from 1762 to 1774, was a delegate to the Congress, and in 1775 he became Postmaster. He was appointed Register of Probate on Sept. 29, 1776 and held the office until his death, March 21, 1815. The next Register was Nathaniel Lord, 3**, “Squire Lord” as he was familiarly known, who had been Clerk to Mr. Noyes. He was graduated from Harvard in 1798. Coming to the office of Register with the experience gained as Clerk, it is said that he performed his duties with such orderliness and neatness and originality of method, that the Registry became a model office. His term extended from May 29, 1815 to 1851. During his term of office, the Probate Court and Registry attained the dignity of a building, erected for its own use.

There were many Nathaniel Lords in Ipswich during the town’s first two centuries. The name appeared in many lineages of the Lord family. (source: Hammatt Papers)

The western half of this house predates the eastern side and is listed as having been built in 1720. In 1652, a carpenter named Walter Roper purchased the original house from Allan Perley. Roper died in 1680. Re-used beams in the basement may date to the original 1635 structure, but this is unknown.

Margaret Weldon performed the original survey of this house for the Ipswich Historical Commission and noted that “most of the visible trim is of the Federal period (Third Period) or later, but some remnants of earlier trim survive.” Architectural historian Sue Nelson adds, ” I suspect that the 1720 date is a ‘no earlier than’ date. Ms. Weldon saw some remnants of Second Period material in the finishes and identified it as no earlier than about 1720, the beginning of the Second Period of English colonial architecture. It is quite possible that material from a building earlier than 1720 could have been reused in the cellar as sleepers for a newer structure. This happened quite commonly – we never threw anything away!”

In 1847 a new foundation was constructed in line with other houses on the street. The older northwest section was moved onto that foundation, the more recent northeast side of the house was demolished and the present northeast side was added, creating the finished form of the elegant and historic home at this location today. A sunken area behind the house indicates the location and size of the earlier foundation.

Casey and Ann Wright currently reside in this house. Casey recently discovered a document indicating the possible earlier date of construction for the northwest side in the “History and Genealogy of the Perley family” compiled and published in 1906 by M.V.B. Perley. Excerpts are copied below:

ALLAN PERLEY, the emigrant ancestor of the Perley Family in America, was born in Wales, England, in the first quarter of the year 1608, and died in Ipswich, Massachusetts, 28 Dec, 1675. He married, in the year 1635, Susanna Bokenson, who died in Ipswich, 11 Feb., 1692, after a widowhood of sixteen years.

Mr. Perley came to this country at the age of twenty-two years in the fleet with Governor Winthrop, and located in “Charlestowne Village,” on land which is now included in the city of Woburn. According to the manuscript chart of the family, “From thence he moved to Ipswich in 1634.” By the town records, he was in Ipswich in 1635. He located in Ipswich, on High street, a short distance from Governor Bradstreet and the Waldo family. The place was and is the second house lot northwest of the High Street cemetery, and it is remarkable that it has the same shape and area now that it had then — two and a half centuries ago.

It was a picturesque spot. Located on the western slope of Town hill and agreeably elevated from the street, it commanded a fine view of the verdant slopes of Turkey and Timber hills and the range of houses along Scott’s lane, the present Washington street. The deep frontage of his lot afforded ample opportunity to arrange a spacious avenue from the street to his dwelling, with flowering plants and shrubbery on either side, after the fashion of the average gentleman of the old country.

Whatever he did in the matter, his selection of grounds of such possible improvements, attest his good taste and judgment, educated, no doubt, by the experiences of his early life. There he brought his young wife and began the business of life anew; there most of his children were born; thence have radiated the family name and influence.

Allan Perley resided there about seventeen years, selling on 3 Sept., 1652, for £21, his “dwelling house and homestead” to Walter Roper, carpenter of Topsfield.

Mr. Roper devised his “house, barn and homestead, valued at £80 (the carpenter having built a new house?) to his son John. John Roper died 17 Nov., 1709, leaving by will dated 22 Nov., 1709, his “mansion house, barn and homestead,” valued at £100 to his “loving cousin Benjamin Dutch.” Mr. Dutch divided the property into half parts, “through the chimney from top to bottom” and in Feb., 1737, sold the northwestern half to John Browne, 4th, of Ipswich, and 16 June, 1741, the southeastern half to Nathaniel Lord, Jr., of Ipswich, hatter.

Mr. Browne, in Jan., 1776, devised his part to his widow, who, as Lydia Thornton, 28 June, 1798, sold the premises to the same Nathaniel Lord, Jr., as above, who then owned the whole original estate. Mr. Lord, 8 Aug., 1796, devised it to his sons Abraham and Isaac. Abraham died intestate and childless, and in the division of his estate, 9 Oct., 1811, his interest in this property was settled upon his brother Isaac, who then owned the whole. Isaac on 17 May, 1825, devised it to his son Levi, who, 4 June, 1869, left it to his son George Edward Lord, who now owns it and resides there.

This photo (above) shows the estate as it was in November, 1908. The proud little white rooster, back near the big elm, shows the elevation at that point above the street. There was an old well, now filled, about half way of the fence between the western corner of the house and the street; and it was probably Allan, “our father which gave us the well, and drank thereof himself, and his children, and his cattle.”

The house stands about a rod from the street; the northwestern part is probably a century or more old; the southeastern was built in 1847, when the whole structure was moved forward probably its width, in order to be on a line with the house next to it. George Edward Lord (1832 – 1905) was the last Lord to live in the house. His daughter Annie Lord Downing (1859-1926) was a dress-maker, married to Benjamin D. Downing 1842-1892.”

On page 374 of the first volume of Ipswich in the Massachusetts Bay Colony (1905), Thomas Franklin Waters provides additional information:

Allan Perley, the original grantee, sold his house and land to Walter Roper, Sept. 3, 1652 (Ips Deeds 2: 44). John Roper succeeded, then Benjamin Dutch. Dutch sold the northwest half of the homestead, two acres in all, lately of John Roper to John Brown, 4th Feb. 3, 1737 and the northeast half to Nathaniel Lord, June 16, 1741. Lydia Thornton, widow, sold half an old house, bequeathed her by her former husband, Mr. John Brown, to Nathaniel Lord, hatter, January 23, 1796. Nathaniel thus came into possession of the whole. At his decease the northwest half went to the heirs of Abraham and the southeast half to Isaac, sons of Nathaniel. Issac succeeded to the whole eventually. His son, Levi inherited and Levi’s son, George, now owns. The old house stood about 30 ft. further back.

According to a Rootsweb document, Walter Roper died in Ipswich in July 1680, in his 68th year. His will names wife Susan, children John, Nathaniel, Mary, Elizabeth and Sarah. If we assume, as M.V.B. Perley suggested, that Walter Roper tore down the original Perley house and built the northwest section of this house that he left to his son John, this would have occurred between the date he purchased the property in 1652 and the date of his death, 1680. We know that Walter Roper lived for many years at this location based on various Ipswich court records.

In 1754 Tutor Flynt of Harvard College went from Cambridge to Portsmouth by hackney. He was then eighty years old, and was accompanied by David Sewall. an undergraduate who made notes of the journey. The two pilgrims passed a night in Ipswich on their return at the home of the Rev Nathaniel and Mrs Mary Leverett Rogers now known as the residence of the late Nathaniel Lord Esq.

This handsome house has passed through many hands and many states before reaching its present, unified appearance. Allen perley, the original grantee of the lot, built the first house on the site before 1650. The property passed to Walter Roper, dohn Roper, and then Benjamin Dutch. Dutch sold half of the homestead, and half of the house then on the lot, to John Brown in 1737 (77:33), and the other half to Nathaniel Lord in 1741 (84:202). Fifty-five years passed before Lord was able to reunite reunite the house under single ownership (181:237, of 1796), and upon his death the house was again split between his heirs (Probate Record 379:62, of 1800). Nathaniel’s son -saac eventually consolidated ownership once again, and bequethed the property to his son Levi (before 1832).

Around 1847 Levi made physical the divisions that earlier had been only legal. He tore down the northeast part of the house (the part first acquired by his ancestor Nathaniel in 1741) and moved forward the northwest part. To this he added a new half, replacing the northeast portion. The old part of the present house, therefore, is the western half, but the date of its construction, and identity of its first owner is uncertain. Most of the visible trim is of the Federal period or later, but some remnants of earlier trim survive. There is no evidence that Allen Perley’s ancient structure passed into the hands of the Lords, but the house that Nathaniel Lord bequethed to his heirs in 1800 must have been built before the long period of divided ownership (1737-1796).